What Paleo Means to Me 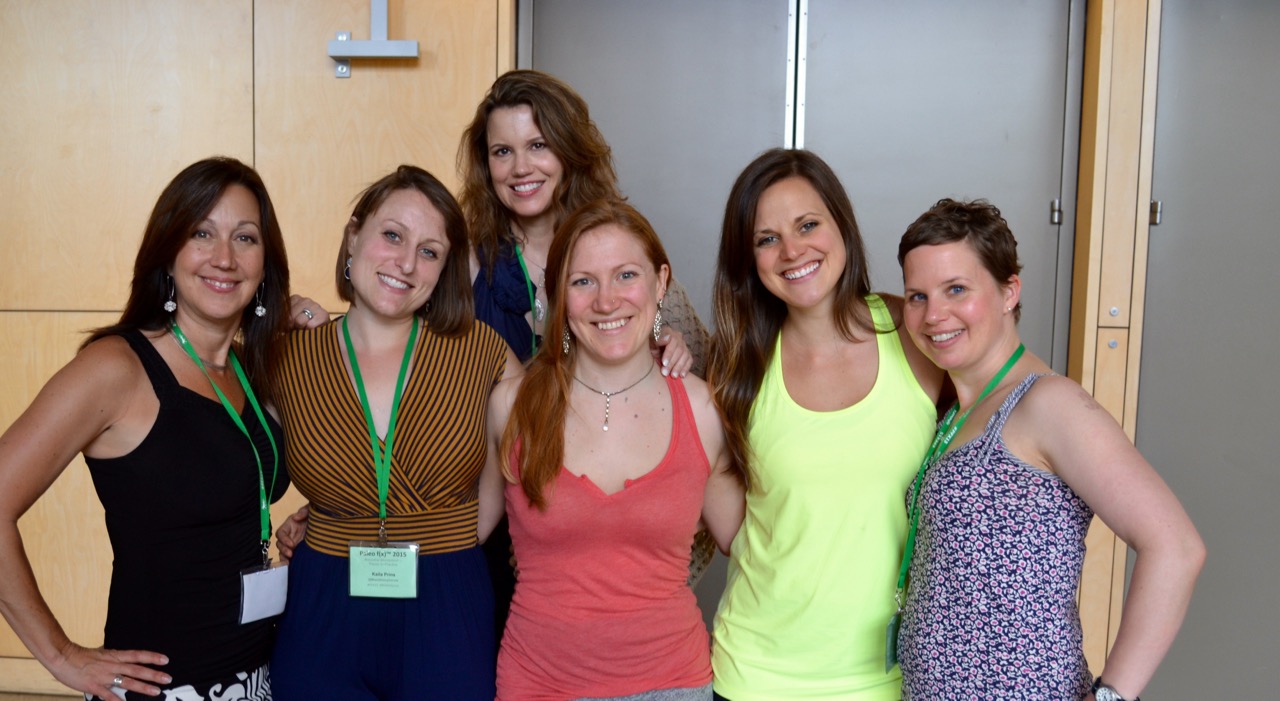 Last week I missed putting up my regular Thursday blog post. This was for the best reason imaginable: I was at Paleo fx! Paleo fx is the annual meeting where die hard paleo fans, new paleo converts, and paleo movers and shakers get together to connect, to revel, and to party, party, party.

Yet much as paleo fx is a coming together, it is also a divisive coming apart. I don’t mean to wax dramatic on you, but it’s a fact: I might hug Ben Greenfield or Jimmy Moore, but I’m still going to dig my heels in against their overtures to low carb diets. Similarly, I might get to meet infamous Cross Fit athletes, but I’m still going to advise my fans to close their eyes during the Paleo Fx introductory video, in which rock hard abs are gloriously depicted as the pinnacle of paleo fitness and bro-y awesomeness.

Paleo means a lot of things to a lot of different people. In some ways this is a beautiful thing – it makes us a diverse community. Nevertheless, I have my own feelings about what paleo should be. My vision is different from other people’s… and that’s okay. I’m even going to  fight for mine, because even while I don’t ever believe any single ideology should WIN the paleosphere, the ideology(ies) I love within paleo definitely need their place. They need to be heard. They need to be visible and valid. Honored.

This year Paleo Fx brought this home to me in a big way. I am coming away from paleo fx determined to vocal. Sometimes here at Paleo for Women, in our sweet little corner of the paleo community, I forget that our body positive, accepting and loving principles aren’t universally accepted. This weekend I remembered. I re-committed myself to standing up and out for what I believe in.

This is what paleo means to me:

1. Paleo is about being a natural body.

While on the surface this idea may seem like a no-brainer to just about everybody, it’s not.

For me, paleo is about letting your body play a role in your decision making process. It isn’t about hacks, it isn’t about perfection, it isn’t about turning yourself into a bionic, manufactured, fighting machine. Lots of (but of course not all, and theres room for everybody!) what I saw at Paleo fx felt like that: perfectionisty, tweaking, biohacker culture.

I don’t have anything particularly against biohacking per se – if you find some good tweaks that make your life better, all the more power to you. What I take issue with are the boatloads of supplements, the energy tricks, the performance hacks, the competitive vibe, the ceaseless quest. This draws away from that which is truly relaxed… and for me, slothfully (humanly) human.

I mean, sure, you can do the whole biohacking thing if you want to, but I prefer to think of human beings as the soft animals of Mary Oliver fame. (She writes: “you only need to let the soft animal of your body love what it loves.”)

For me, paleo is about relaxing into my body, not seizing control and making it do my bidding. It’s about listening, and empathy, and stillness. So much of our culture in America is obsessed with doing. Something I very much aspire to is being. I want to be less of a human doing, and more of a human being. I believe this is a very important aspect of our humanity that gets ignored because it does not sell. It is not sexy. It is not flashy.

But it is the bomb.

2. Paleo is not about macronutrients

Can we just… can we just stop this already? We’ve been fighting about carbohydrates for years now. It’s ridiculous, and I want it to end, now.

The science is actually on my side: paleo is macronutrient-neutral. Anthropological studies show, and quite clearly, that ancestral cultures and extant hunter-gatherer cultures eat a wide variety of macronutrient ratios. Some survive off of mostly fat and protein. Others eat tons of tropical fruits. They appear to all be in fairly similar, and quite good, health.

Plenty of other people however definitely need lots of carbs – especially those pregnant, nursing, with hypothyroidism, recovering from hypothalamic amenorrhea, stressed out, sleep deprived, or low in serotonin. To name a few. When one kick ass Paleo for Women community member asked a “expert panel on carbohydrates” (of all men, mind you, thanks paleo fx selection committee) about carbs for women with fertility problems, they all said, “no, no carbs.”

To which I can only say, try having a pair of ovaries for a day, or several thousand.

This is another point that may seem obvious to everybody. Nevertheless, when you take a peak under the surface of a lot of what is happening in the paleosphere, you find that it actually doesn’t always pan out this way.

Paleo ends up being about physical fitness, which is not the same as health. This year at Paleo Fx we saw a stronger focus on fitness than ever before.

Paleo also ends up being about body fat, and the way that you look, which is ridiculous.

Fortunately, I didn’t see much of this at paleo fx. Pretty much everyone there was awesome and accepting of everybody else. Period. It was great. But I know… I know that the sphere is full of jerks hiding in the corners, too. Paleo, like the rest of the world, is full of people who sit behind their computer screens and say mean things to my friends because they don’t have six packs.

Paleo is not about tearing each other down, or judging each other based on appearances. It’s about all of us on our own journeys toward better health and happiness together.

As super educated, relatively privileged people, more or less, I consider it our duty in the paleosphere to be on the frontlines of inclusivity.

There should never be a discussion that has zero women invited to partake in it, especially when its on a health topic in which women are known to have unique needs.

Paleo should also be doing its best with regards to race and socioeconomic inclusivity, too.

Now, I don’t mean to say, with paleo, you shouldn’t make or aspire to make changes in your body. I think you can and definitely should do that. Health is a good goal. Weight loss (if done physically and mentally healthfully) is another. Changes are usually good and awesome.

But changes should be made in the context of acceptance. Your body is the way it is because you were born with a set of genes, and you were exposed to a particular environment in your mother’s womb, and you were nursed off of breast milk or formula, and then you spent your whole childhood and young adulthood eating various things and encountering different struggles. Your body is not perfect – no one’s is.

Your body is the way it is because of a whole set of circumstances that were entirely outside of your control. Even if you ate badly, you did not know it. Today, you are empowered with knowledge. You have the ability and the blessing to take control. You can work with your body to a healthier and happier future.

6. Paleo is about having a healthy relationship with food

I bring this up because even while just about everybody would say “yes of course paleo is about healthy relationships with food” we are not talking about this nearly as much as we should be. Last year at paleo fx we saw an influx of powerful people like Madelyn Moon, Kaila Prins, Summer Innanen, Molly Galbraith, and the like, talking about body acceptance and healthy relationships with food at paleo fx. It was so exciting!

This year we saw less of this. This may explain why Kaila’s talk on food obsession (one of the only ones about the psychology of eating) was absolutely packed. Also, there was hardly a dry eye in the room. Kaila’s talk hit home in a big way. We need to talk about this more. This is something that people need from us – psychological and moral and emotional support.

For me, being paleo means that I ditch perfection. It means that I stop trying to rabidly control my body. It means that I no longer restrict myself, punish myself, or feel guilty about food. It means that I eat whatever macronutrient ratios my body may need or crave, and that I give myself the permission to play with that and with my food choices however I want.

Paleo means that I stop focusing on my body fat percentage and my leg press numbers. It means that I stop counting my health in terms of fat grams eaten or my dress size, or even the number of miles I’ve sprinted, and instead think about how I feel, the connections I am healing with myself and with others. That is another very important part of being paleo, too – connecting with the people around me, and sustainably integrating myself into the food web and ecosystem. Paleo fx was big on that this year, and I hope that we continue to promote sustainability and interconnectivity as a big part of what it means to be paleo.

Which, if you’re interested in more about, you can read about in moderately entertaining form, here.

These are the things that paleo means to me. What does paleo mean to you?


Note - some links above may contain affiliate links. You don't pay more, but we get a small cut to help keep this organization running. It's tough to balance ethics with the need to stay alive. Thank you for your patience and understanding!
.
Tweet23
Share275
Pin6
Share1
304 Shares