The Physiology of Women’s Weight Loss Part I: Estrogen 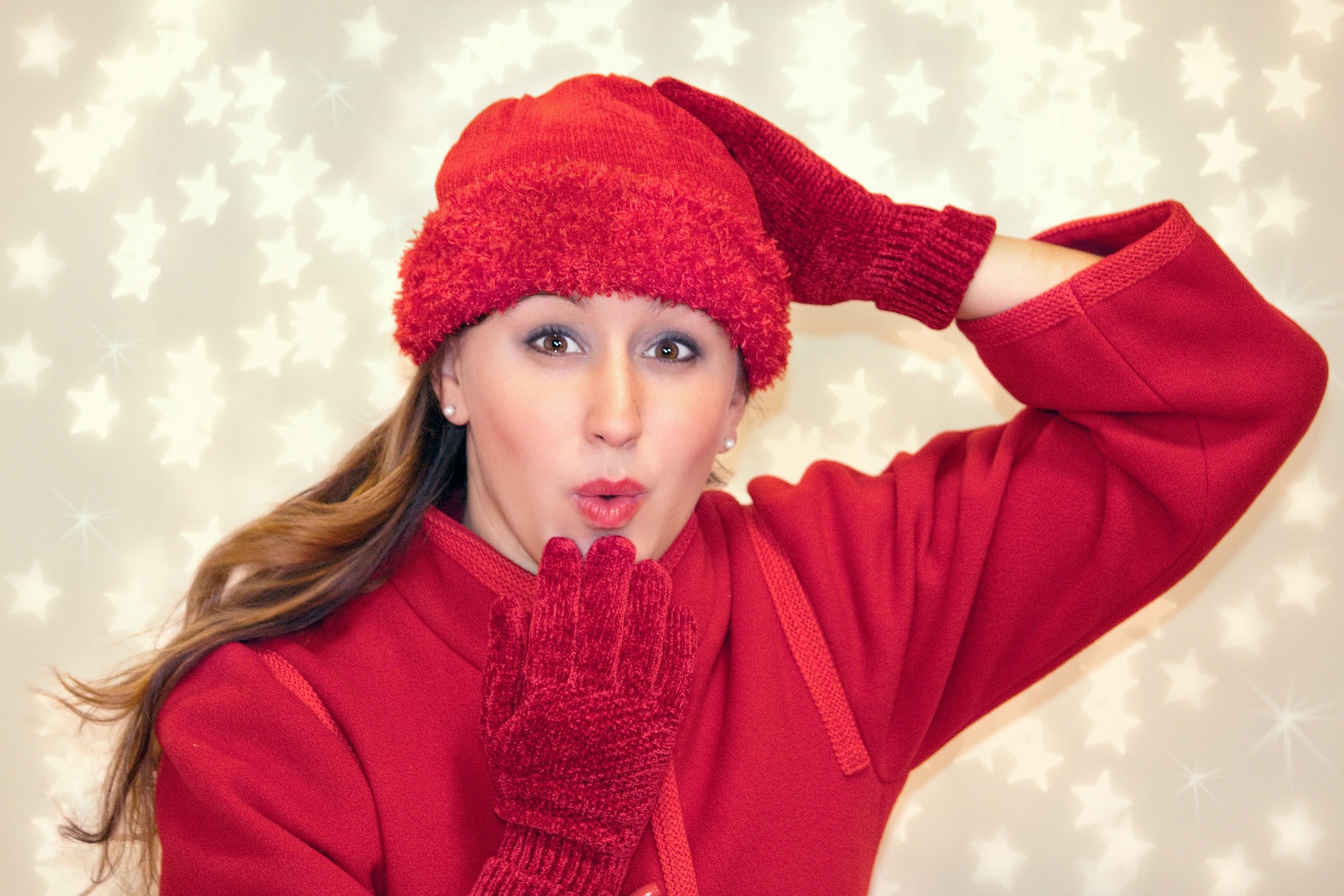 Many people in the modern world believe that it is more difficult for women to lose weight than for men.   This is unfortunate, and it’s an over-simplification, but the idea is not precisely wrong.

A woman’s body is laced with hormonal complexities that a man does not have.  This is strikingly born out of the simple fact that women are fetus-bearing organisms. For this reason, a woman’s body comes equipped with a whole suite of mechanisms designed to make sure she has plentiful nutrients and energy to support another life growing inside of her.

These fat-aggregating mechanisms can be broken down into two primary factors: estrogen-driven fat deposition, and hypothalamic weight regulation. Both are complex; both interplay with one another; and both are crucial to understand for a woman to lose weight healthfully and easily.

Estrogen Levels and the Female Body

Estrogen levels correlate with and are responsible for a woman’s menstruation.  For this reason, a woman’s estrogen levels begin to rise during puberty, peak in her 20’s and 30’s, and drop off in menopause.  This menopausal shift causes increased and shifted body fat mass in older women.

In women of reproductive age, estrogen levels rise and fall with her menstrual cycle.   During the luteal phase in which the uterus is preparing itself to be implanted with an egg a woman’s estrogen levels peak at four-six times the amount she might have at the low point in her cycle, the first day of menstruation. 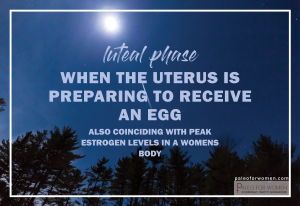 There are three varieties of estrogen in a woman’s body.  They are differentiated by the number of -OH molecules attached to them, so they commonly go by E1, E2, and E3.

The most prominent form of estrogen in the female body, at least before menopause, is E2. (In menopause E2 drops off and E3 becomes more prominent.) E2 is called estradiol, so when most women get their hormones level tested, this is the most commonly tested form.  Yet, since E2 comprises the clear majority of a reproductive woman’s estrogen levels, and since all the forms of estrogen perform similar functions, calling E2 “estrogen” usually serves just as well.

In pre-menopausal women, the ovaries are the principle source of estrogen, which functions as a circulating hormone to act on distal target tissues.  This means that estrogen produced in the ovaries influences the whole body, such that ovarian estrogen can enhance weight gain or alter DNA expression in cells as far spread as a woman’s pinky finger or her spleen.

So why is Estrogen Associated with Weight Gain?

Estrogen is commonly associated with weight gain, but why?  Does the fat cause the estrogen, or is it the other way around?

It’s both.  First, fat cells beget estrogen production. But then elevated estrogen levels further slowdown metabolism, such that estrogen plays a role in convincing a body to store more weight.  For many, this becomes a vicious cycle of accelerating weight gain.

The mechanism by which estrogen causes weight gain is through inhibiting thyroid function. In a normal-weight woman, estrogen and thyroid hormone play off of each other in an intricate balance.

Yet when a woman becomes overweight, her estrogen levels drive her thyroid function relentlessly downward. With impaired thyroid function, a woman can feel sluggish and fatigued, and therefore expend less energy, and subconsciously down-regulate her metabolism. Her body is burning less and less fuel to get by and she is not even aware of it.   Up to 10 percent of American women have issues with hypothyroidism. 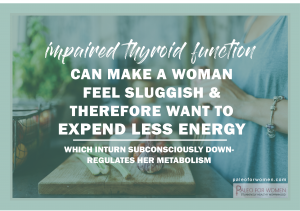 Aromatase enzymes are present in all types of tissue, yet the aromatase expressed in adipose tissue accounts for the clear majority of non-ovarian estrogen production in men and in women.  This is why, many women suffer estrogen-deficiency symptoms when they lose too much weight.

Additionally, the aromatization of testosterone to estrogen increases as a function of body weight and advancing age.  This is a problem for men, as well as another compounding factor for menopausal women.  It can also lead quickly to estrogen dominance, which causes its own slew of reproductive problems.

Why is Estrogen a Crucial Factor in Weight Loss?

Part I: Within the Cell

Be that as it may, estrogen is actually a crucial factor in weight loss, and for several reasons.

1) Estrogen decreases the activity of fat-absorption within a cell.  It does this by decreasing the activity of lipoprotein lipase (LPL). LPL is an enzyme which favors fat uptake into the cells, so having estrogen around inside of a cell helps prevent it from growing larger.

2) Estrogen increases the activity of another enzyme called hormone sensitive lipase (HSL).  HSL is the other big player in regulating a woman’s fat metabolism.   Epinephrine stimulates HSL, and then HSL incites lipolysis, which is a fancy word for the breakdown of fat. HSL activity occurs most commonly in exercise.   So, what estrogen is doing in a sense is making this exercise phenomenon more powerful and occur more often.  During aerobic exercise, increased body temperature and a greater concentration of epinephrine in the blood stream enhances HSL responsiveness to epinephrine.  This then triggers the fat-breakdown activity of HSL.

3) Estrogen has also been reported to stimulate the production of growth hormone. Growth hormone inhibits the uptake of glucose (carbohydrate) by fat tissues and increases the mobilization of fatty acids from fat cells. GH works by inhibiting insulin production from the pancreas and stimulating HSL, the fat-burning enzyme described above. Insulin is the main hormone that promotes glucose transport into muscle cells to be used as energy, and it is a potent inhibitor of HSL.  For this reason, decreasing insulin levels via GH via estrogen helps speed HSL fat burning activity.

Women have more fat than men.  A “fit” woman can safely go down to around eighteen per cent body fat, but no further, whereas a fit man can go almost as low as he’d like with no problems.  Some male weight lifters manage to get down to around five percent.

Additionally, women store fat in different places than men.  When men gain weight, it is almost always concentrated around their abdomens.  This is called visceral fat, and it is the fat most highly associated with diabetes and other diseases of civilization.

The other kind of fat is called subcutaneous fat, and it’s the fat that appears underneath the skin spread out around the body.  A woman’s body prefers subcutaneous fat.  This phenomenon explains why women typically have less muscle definition than men–a tiny layer of fat is usually smoothing over all little muscular ripples.

It also explains why they have large hips instead of large abdomens.  Women have more subcutaneous fat than men in general, and they also store it preferentially in tissue around the hips, thighs, and buttocks.

As a side note, estrogen is also important, but not the only factor, for the development and size of breast tissue.

But women only have large hips versus abdomens so long as they have enough estrogen in their systems.  As soon as estrogen drops off, specifically in menopause, women see their fat mass shift to their middles.  This is a hazard to their health, as well as a bit of an affront to their identity as shapely, reproductive beings.  There are ways to mitigate that, of course, primary of which is eating a natural, anti-inflammatory diet, secondary of which is staying active and fit.

Estrogen causes an increase in the receptor known as anti-lipolytic alpha 2A-adrenergic receptor. (Anti-lipolytic = anti-fat.)  This is how subcutaneous cells maintain their fat mass while other cells do not.  In activating this receptor, estrogen increases the number of anti-fat breakdown receptors in subcutaneous fat. Because of the increase in these receptors, cells break down fat less often.

This is not a bad thing!  This is a glorious thing. 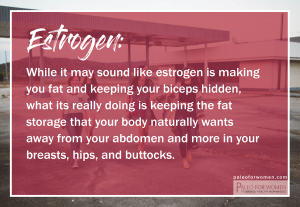 Men are not so lucky.  They pack on the disease-causing abdominal fat like it’s their jobs. Estrogen, on the other hand, protects a woman from that phenomenon.  As well as making her body feminine.  Which is hot.

Estrogen also plays a crucial role in moderating a woman’s energy expenditure and appetite.  This makes intuitive sense: if estrogen levels in the blood are high enough, this means that the ovaries are functioning and that a woman has enough fat on her in order to support a fetus.

The hypothalamus, which is the center of the brain which regulates appetite and feeding behavior, includes receptors for a number of hormones and metabolites.  Estrogen is one of them.

The more estrogen a woman has in her body, the more the hypothalamus detects energy sufficiency, and the less she needs to eat.  This also implies the converse: when estrogen levels drop to low levels, such as when a woman’s ovaries are removed or if she is anorexic, cravings and food intake increase exponentially.

Estrogen plays a complicated role in a woman’s fat distribution and weight regulation. It is associated with high fat levels, but this is not necessarily because it makes a woman fat. Instead, this is possibly just because fat cells produce estrogen.

In fact, estrogen is often very helpful for weight loss.

– It helps the body know that it is fed.

– And at the very least, estrogen is responsible for keeping a woman’s hips, breasts, and all glorious womanly parts exultant in that glorious womanhood.

Without estrogen, women would not be women, and how possibly dull would the world be like that?

For more information on weight loss, check out the books I wrote here and here. Another favorite of mine, Why Women Need Fat, is available here.


Note - some links above may contain affiliate links. You don't pay more, but we get a small cut to help keep this organization running. It's tough to balance ethics with the need to stay alive. Thank you for your patience and understanding!
.
Tweet4
Share440
Pin116
Share1
560 Shares