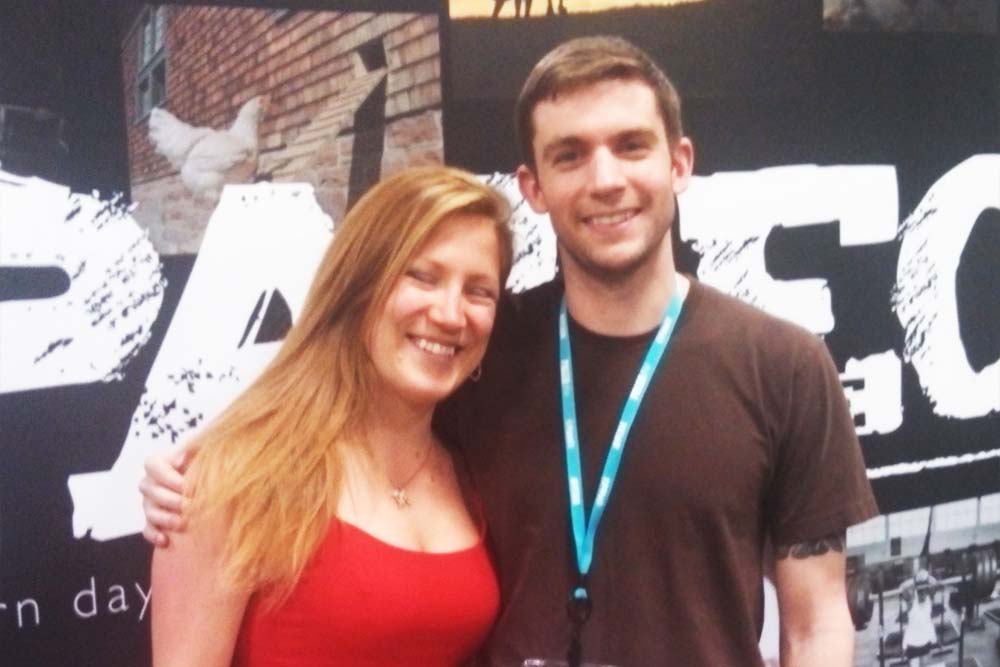 I’ve been making the rounds on cookbooks lately. Michelle. Danielle. Josh. Chowstalker. If you know me well at all, you also know this is damn funny, because I’ll never spend more time than I absolutely have to in the kitchen. It’s not that I don’t like to cook or to enjoy a good meal — it’s just that I can’t help but consider it a monumental waste of time.

Which I guess could be interpreted as an insult to many of my dear friends, but I promise you, I consider your jobs and your interests worthwhile. Just not for me, because my focus happens to be elsewhere.

So without further ado I’d like to take you along for this cookbook ride. Today’s stop, another friend/chef, is a brand new one (to me) of whom I became instantly and rabidly fond of this year at paleo fx: Russ Crandall. 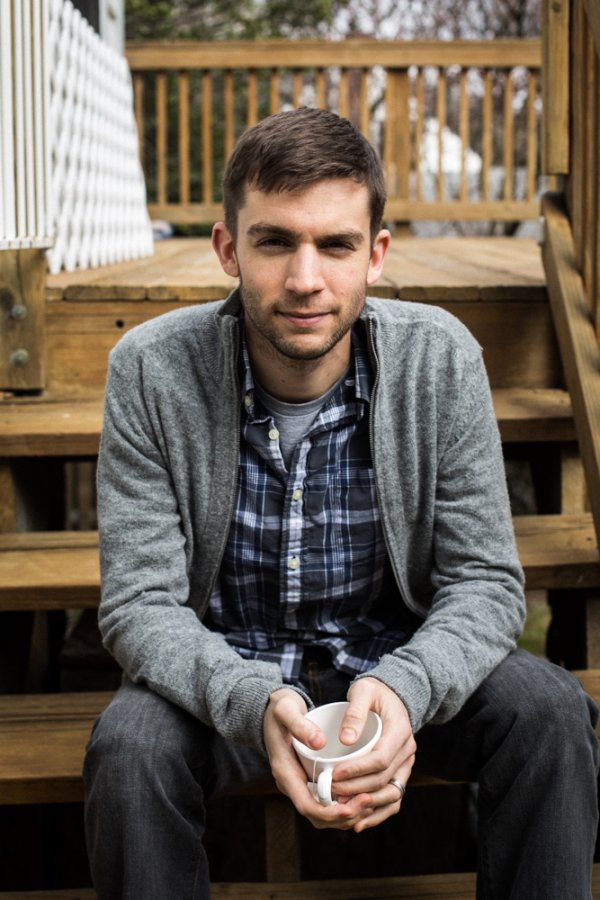 Russ (of thedomesticman.com) has a newly released cookbook out. It’s one of my all time favorites (I know, I know, they can’t all be favorites, but humor me, I mean it, okay?). It’s called The Ancestral Table, and it’s full of stunning photography and creative recipes and brilliant tips. No surprises here — of course we expected Russ’s insights to be brilliant — but there are a few things about this book and this man that make them special. 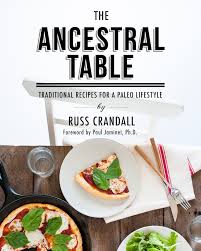 1) The foreword is by Paul Jaminet. This is an official (the official?) “perfect health diet” cookbook — which means it includes carbohydrates (gasp!), highly nutrient dense foods, and traditional foods — ancestral ones — from around the globe.

2) The quality is… obvious. Stellar.

3) The mission is unique and spectacular. Russ’s book is… refined, in some ways.  Which is a part of why I have so much respect for Russ. I wouldn’t have known about the mission of the book unless I had met Russ. But what I learned, flopped over the arm of a sofa after a heavy day of networking and hugging fans, and Russ patiently  humoring my drowsy inquisition, was this:

Russ believes that one of the most important things we can do for the paleo movement is to up our game in the highest eschelons of the foodie and fine cuisine world.

The reason we don’t have high quality and healthy ingredients like arrowroot flour, coconut flour, coconut aminos, and the like robustly filling out supermarket shelves is that there is no demand for them. There is no demand for them because no one knows about them or how to use them. No one knows about them for a lot of reasons, but one is that no one is teaching us how to use ’em from the top down. Like philosophy, art, painting, and literature, the culinary world is heavily influenced by trickle-down preferences from those of elite status.

Get ancestral and traditional cooking methods to be taken more seriously by culinary institutions and elite chefs, and magnitudes more chefs will know how to manipulate and delight in them.

What ingredients we know how to use, we use, and then we use ’em better and better.

So one of Russ’s many culinary missions is to convince culinary leaders and institutions that ancestral cooking makes top notch dishes.

The Ancestral Table undertakes and succeeds at this.

This achievement does not mean there’s any kind of far-fetched, silly hobnobbing (I’m actually not sure what this word means, but I mean “fancy-pants BS”) in Russ’s book. You’ll recognize all the ingredients and be able to cook the recipes easy peasy.

You’ll just also happen to be participating in a culinary revolution. This is the brilliance of Russ’s work. He makes ancestral cooking both practically easy and practically transcendent.

This aspect of his work is particularly inspiring.

And then there is the man himself. 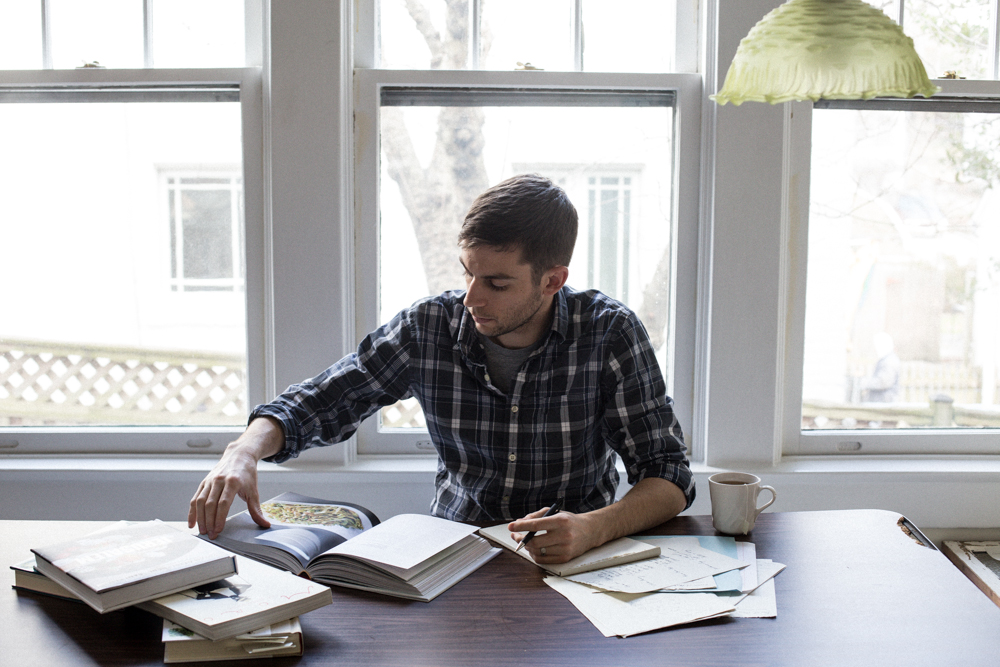 No such things as too many books!

I don’t want to out him too much publicly, in case he is a more private man than I am aware of, but here are some tidbits to entice you into falling in love with him, like just about everyone I’ve ever met already has:

1) Russ has a beautiful family and a beautiful baby boy who I could look at photos of for ages.

2) Russ recognized the game “Buster Buddies” — an old Play Station 1 eccentricity that only the coolest of the coolest of gamers remember — when I mentioned it at a dinner party.

3) Russ is a highly ranked Navy office of sorts.

4) Actually he’s a linguist in the Navy — one of the top ranked — who teaches and speaks fluent Russian.

5) He also happens to speak Indonesian.

6) And to work more than 40+ hours a week in addition to writing The Domestic Man blog.

7) Russ is the one and only man behind the food blog The Domestic Man, meaning he and I are some of the few full-time advocates without staff.

9) Russ has big dreams. I’m not giving it away, but Russ has some field trips lined up that are going to help bridge the gap between food production on farms and in factories and food production in the kitchen. He is also planning to work on hospital food reform–you know, along with blogging and writing and teaching Russian to the Navy full time — which is just so damn cool.

9) He hates onions, and in fact used to write under the handle Onionsaregross.

Soooooooooooo. It’s a good book and a good blog and Russ jumped way up not only on my RSS feed but also on my list of people to admire and aspire to be like.

The blog, Domestic Man, can be found here.


Note - some links above may contain affiliate links. You don't pay more, but we get a small cut to help keep this organization running. It's tough to balance ethics with the need to stay alive. Thank you for your patience and understanding!
.
Tweet2
Share140
Pin
Share
142 Shares