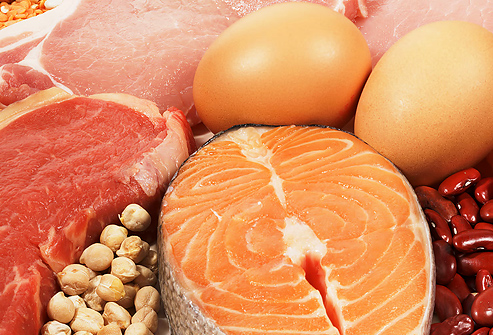 This means that when certain amino acids break down from proteins during digestion, we can experience mood changes and anxiety.  Other amino acids can help relieve anxiety, depending on what foods are consumed.

Tyrosine uniquely increases dopamine concentrations in the brain, for example.  This can have positive effects for people with dopamine deficiencies, but it can hurt people who are already excitable.  Another example is Leucine.   Leucine increases m-Tor signalling, which is somewhat inflammatory and has been shown in many cases to be associated with aging and poor immune response.

High Protein Diets, Stress and Anxiety in the Short Term

Regardless of the differences in amino acids, higher protein diets correlate with anxiety in both animal and human studies.   Here, in one study, researchers set out to show that a high carbohydrate diet would induce more stress than a high protein diet, yet their finding ended up being the opposite: a high protein meal created a greater cortisol response than a high carbohydrate meal in women.

Here, high protein diets are shown to decrease testosterone and increase cortisol in men.   These studies demonstrate that high protein meals increase stress responses.    Moreover, MDs anecdotally report acute anxiety in patients once they start high protein diets.    Finally, protein can raise norepinephrine and dopamine levels, both of which are usually high in anxious individuals, and both of which stimulate arousal.

Protein and the neurobiology of GABA

So on the surface the literature on protein intake and mental health is present, but its actually pretty sparse.  Certainly, it seems as though cortisol is associated with high protein consumption, especially in the short term.

But the amount of data out there is not all that much compared to how much research has been done on fat and carbohydrates.  For example: nearly everyone agrees that fluctuating blood sugar is bad for mental health; they also know that tryptophan, a result of carbohydrate metabolism, helps induce feelings of calm and well-being.  So these are ways in which carbohydrates have been thoroughly studied.

Furthermore, nearly everyone also agrees that fat is excellent for mental health.  High fat diets, but not higher protein, nor high carbohydrate, decrease anxiety in rats.   So we know a lot about fat, too.

What about protein?  What we might be able to assert about protein comes not, then, from any epidemiological data, but from neurobiology.  What does looking at amino acid chemistry and neurobiology tell us might be going on with protein metabolism?

It all has to do with GABA.  For more on GABA neurons in general, refer to this post.   In sum:  GABA neurons are inhibitory neurons.  They tell the brain to be quiet.  For people who are depressed and fatigued, therefore, GABA might seem like a problematic molecule, but that’s inaccurate.  GABA malfunctioning has been shown to play a role in almost all mood disorders, and in insomnia, and really any kind of imbalance in the brain that might lead to disordered behavior.  GABA is strongly associated with well-being, calmness, proper memory function, proper circadian rhythms, and good sleep.  GABA, because it inhibits the amygdala, also has been shown to inhibit pain and fear.

One particularly powerful animal study showed the complex relationship between protein restriction and GABA.  The researchers were interested in longevity, which is a topic for a whole other slew of posts, but the  high GABA activity that manifests as a result of protein restriction applies equally well to mental health.

Aging rats, when eating a lower protein diet, saw a long-term elevation of GABA activity.   This increased the functioning of the rats’ immune systems as well as prolonged their lives.  A high protein diet had the exact opposite effect.  Another study found the same effect, except that both young and old rats saw the highest GABA activity on a low protein diet.  These studies are conducted over weeks and months and years.  What this means is that over time, a lower protein diet is optimal for GABA activity in the brain.  This helps with aging, with immune function, and presumably with mood disorders.

The best way to move forward with this information is to just be cognizant of mood throughout the day.  Is heart-rate spiking, or the mind racing, after a high protein meal?  On a day with a particularly high protein intake?   Try mitigating this by spreading protein intake out throughout the day, instead of eating it all at once.  Or try keeping the absolute total to a minimum.  Most people recommend .5 g of protein per lean pound of body weight, and I stand by that as well.  It’s important both in the hour-by-hour day-to-day, as well as for long term mental health.

Of course, protein is also essential for mental health.   I mentioned above that amino acids make up and heavily influence neurotransmitters.  This is true.  It is only an imbalance that can do real harm.   For this reason, the best bet is to eat a sufficient amount of protein, and feel the way forward cautiously, respecting the individuality of each person’s needs. Check out my book, Sexy by Nature, for more about the types and amounts of protein that might be right for you.


Note - some links above may contain affiliate links. You don't pay more, but we get a small cut to help keep this organization running. It's tough to balance ethics with the need to stay alive. Thank you for your patience and understanding!
.
Tweet7
Share330
Pin103
Share3
440 Shares