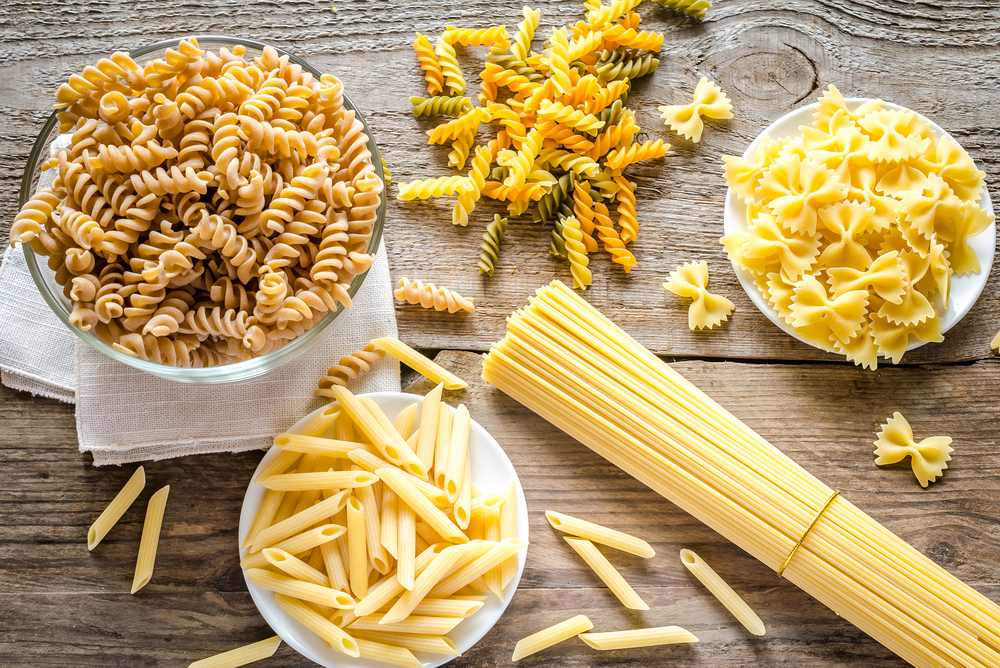 Neuropeptide Y is one of several neuromodulators involved in regulating feeding.   These include classic neurotransmitters such as serotonin, GABA, or dopamine, molecules derived from fatty acids like endocannabinoids, and neuropeptides.   (All of which I will discuss at length eventually.)   Every neuromodulator can be classified as orexic or anorexic.  Orexic cells drive feeding.  Anorexic cells do the opposite.  Neuropeptide Y is one of the orexic cells, and it is in fact one of the strongest.

In the photo below (a snapshot I took of a page in an excellent textbook–Appetite and Body Weight by Tim C Kirkham) orexic and anorexic drivers are compared.  On the left are the orexics, on the right, anorexics.  Note how Neuropeptide Y and Leptin are situated at the top of the respective sides, demonstrating their antagonistic behaviors against each other. 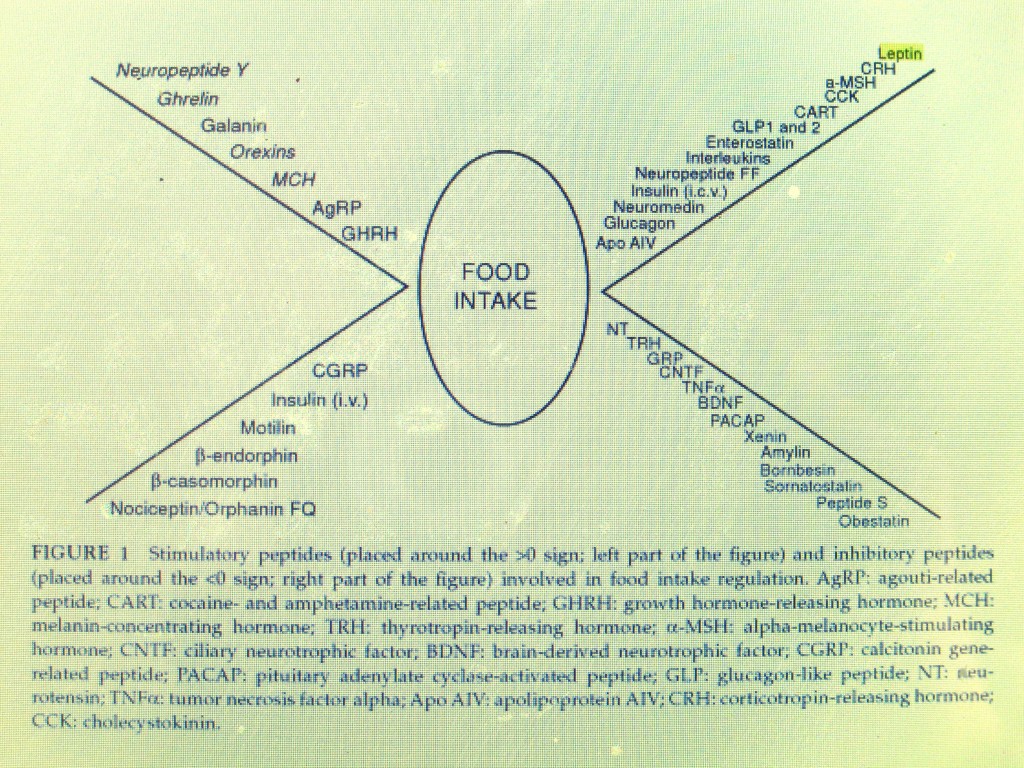 So NPY is strongly orexic.  When injected into the brains of several species of animals, NPY induces several-fold increases in food intake at any time in the dark-light cycle.  Additionally, it is highly involved in the motivation and search for food.  NPY-injected animals are ravenous and incessant: they will eat even when they have to work really hard for it, even if they have to tolerate electric shocks, and even when the food is altered from the natural product and may in fact contain substances they have aversions to, such as quinine.   In animals lacking NPY, eating is delayed and the animal’s efforts at attaining food are sluggish.

NPY delays satiety throughout a meal.  Thus it augments meal size, time spent eating, and meal duration, irrespective of what food is provided.   Animals certainly have preferences for what to eat, but they will take anything and eat it at length if they cannot get their paws on sweet foods.  This action of NPY, along with other orexins, explains why many disordered eaters need to eat and eat and eat, regardless of how much they like the food.

The most fascinating aspect of NPY, however, in my opinion, is the way in which it interplays with macronutrient cravings.    NPY increases carbohydrate cravings first and foremost: NPY-injected animals show an enormous preference for sweet foods.   But NPY also has a fed-fasted-state feedback mechanism: after weeks of being fed either a high-carbohydrate or a high fat diet–so long as it is high calorie–NPY levels fall (though the animals certainly prefer the high-carbohydrate diet), and the animals stop craving carbohydrates that much.

This all occurs in light of the fact that when one is starving at all, NPY levels rise.  They rise in response to fasting, in response to chronic food restriction, and in response to any sort of starvation signal whatsoever, for example, a drop in leptin levels.   NPY levels also continue to increase as the time spent in the fasting state gets longer and longer.   This means that the NPY-driven craving for sweets increases as the fasted state endures.

Once regular feeding is restored, however, NPY levels fall back to baseline.  In this way,  NPY is meant to moderate energy consumption, with a clear preference for carbohydrates.  Why?  Because glucose is the fastest way to get a “fed” signal firing in the brain, at least on an immediate time-scale.   Glucose spikes insulin levels and therefore leptin, which in turn  signals to the NPY right away that the organism is fed.  However, the “fed” state must endure through longer time scales than one simple meal in which leptin levels spike.   Therefore, a long-term undertaking of feeding with any type of macronutrient ratios should be sufficient to mitigate NPY-related problems, so long as energy intake is sufficient to account for energy expenditure.    In the short-term, however, as mentioned, sometimes glucose is the only way to get the NPY neurons (as well as the hypocretin neurons responsible for wakefulness while hungry) to shut up.

This phenomenon explains in part the failure of so many diets.  Neuropeptide Y is one of the strongest stimulators of appetite, and is it triggered first and foremost by low leptin levels and caloric restriction.  Any detection of a fasted state will lead  to the organism craving carbohydrates moreso than usual, and the cravings won’t really subside unless the organism can convince the NPY neurons that it’s not starving.   Herein lies the rub: people restrict, and drives toward feeding rise.  In particular because of NPY-type drives, that drive is focused on carbohydrates.  The more successful a person is at restriction and at willpower, the harder and harder it gets to maintain that level of restriction.   Eventually the stamina fails, and the organism caves, often to a sweet food.  Recall that NPY delays satiation and prolongs feeding quantity and duration.  What this means is that this one bite of sweet food the person allows himself is all-of-the-sudden one thousand bites of sweet foods.  This willpowering individual feels awful about what he’s done, so he gets back into his routine of chronic restriction.   This is a hell of a cycle to be caught in.  My Pepper readers know this all too well.

Re: what NPY-type activity means for fasting and for ketogenic diets:

Glucose availability in the brain is important for NPY regulation.    Glucoprivation- that is, deliberately blocking glucose activity–has been shown to induce feeding and activate hypothalamic NPY neurons in rats.  What this means is that a brain that runs on limited glucose stores may have increased NPY activity.   Ketogenic organisms run on limited glucose stores.

Since many people who fast and/or undertake ketosis experience decreased appetite, there are clearly other, stronger mechanisms at play in the modulation of their appetite than NPY drives; for example, perhaps the simple strength of leptin sensitivity in signalling to the NPY is powerful enough in these individuals to squelch the drive to carbohydrates.   Or perhaps in some individuals moreso than others gluconeogenesis from the liver is functioning well-enough to get adequate glucose supplies to the brain.  I suspect that both of those ideas are in part true.  Nonetheless, NPY explains in part why some people binge so hard on sugar once they take a step off of the fasting or very-low-carb ladders, even if they are not in explicit restriction like the yo-yo dieters I mentioned above.

Many people talk about the addictive power of carbohydrates.  I agree–it’s horrible.  I’ve talked about it many times, and at great length.  Yet what might be worse in some cases is the physiological basis NPY demonstrates for carbohydrate longing.  And the role that restriction plays in the demonic need for sweet foods.   Being in a energy-restricted state might play one of the more powerful roles in why carbohydrate is so insidious in the contemporary American food psyche.


Note - some links above may contain affiliate links. You don't pay more, but we get a small cut to help keep this organization running. It's tough to balance ethics with the need to stay alive. Thank you for your patience and understanding!
.
Tweet8
Share29
Pin8
Share1
45 Shares