My paleo fx experience: anxiety, community, twelve apples a day, and what the hell is this all for, anyway? 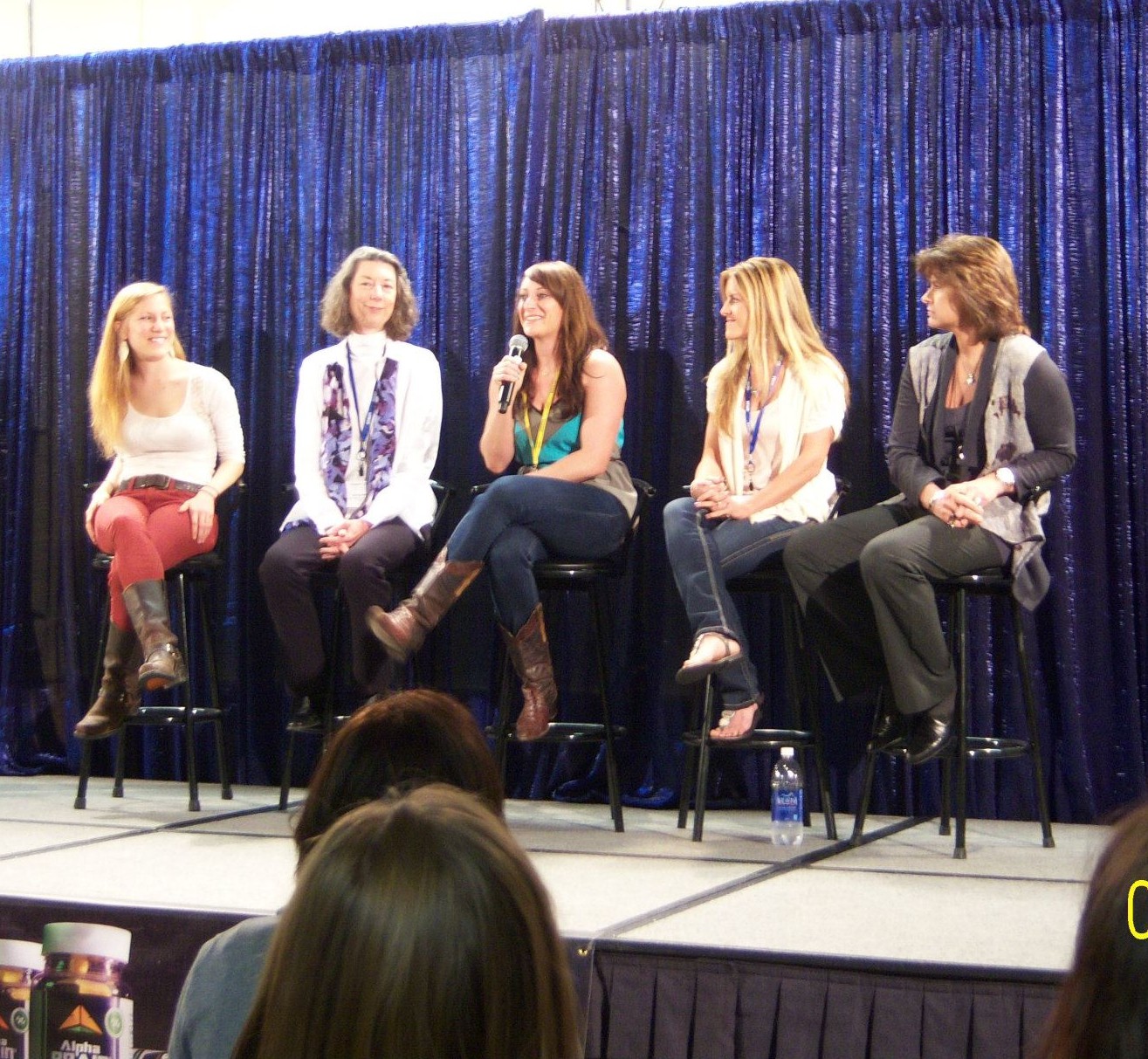 I’ve had a fair bit of time now to reflect on my experience at paleo fx.  Lots of others have done the same.  And these reflections are full of delightful stories.  They tend to revolve around love and community and empowerment, and I love that so much.  I’m not sure how I feel about community formed through a diet — that feels a bit strange to me, and maybe a bit problematic — but I’m such a sucker for community and am so sad about it’s sparseness in this world that I’ll take it where I can get it.

So my paleo fx experience has a lot of resonance with those tales of love (with the diet?  I heard about more than one impassioned tryst!).  But its also of course just mine and was different for a few important reasons.

First — I went to paleo fx with a fair bit of apathy and resentment.  That should come as a surprise.  Aren’t we supposed to be head over heels for this sort of thing?

The thing is, however, that both of these things were kind of good for me.  The apathy came from a place of finally letting go of my need to impress people, particularly the paleosphere.  There’s a whole lot of pressure to maintain what Matt of Paleo Parents calls a “monster” — these blogs and communities that each of us advocates has built — and I’ve wrestled with that a lot in this past year.  Particularly, my life on my blog used to fuel my social validation.  If I could get another health advocate to like what I did, it was like being crowned queen of England for the day.  It was a party.  I thrived off of it.  Later, it made me anxious.  Finally, I figured out what was happening in my brain and I was able to let go.  That meant that I could go to the conference and not freak out about making connections or what not.  I could just go and have a good time because isn’t that what living is for?

I also went with resentment.   Once I realized the way I had twisted my existence around my blog, I got indignant about it.  Look at what you’ve done to my brain, health advocacy.   And even while I let go of the vast majority of my anxiety about all of that perfectionism and being impressive stuff, I still had some anxiety going into the conference.  And I lost a good week’s worth of sleep over it.  It gave me stress acne.  My work lagged.  That pissed me off.  Hard as I tried, I couldn’t shake my nerves.  I arrived at the conference with pretty little motivation to be there.

But of course I loved it at the same time.

So I went and I had a pretty wonderful time.  With my newfound apathy in my pocket, I was not actually upset, but rather liberated to enjoy what I wanted and how I wanted to.  I rolled into the conference in the middle of the afternoon on a couple of the days.  I went for walks outside the center.  I actually only attended three talks outside of my own.  But one of them was Robb Wolf‘s, and he talked a bit about anxiety.  And talking about anxiety — well, it gives me anxiety.  So I left.  That makes 2.5 talks.

One thing I obviously love enormously about paleo fx is the community there.  There’s a larger community — all of these people coming together because they have the same vision and so many lovely values in common — and then there’s the smaller community.  I got to get closer to Stacy and Matt.  I played roommate for four days with new Austin resident and all around baller Todd Dosenberry. I experienced the delight of finally meeting Abel‘s girlfriend Alyson who is a radiant delight in her own right.  I got to laugh over campfires with Sean and George and Juli and Danielle and Chris and Emily.  If you’re as plugged in to the paleo community as I am, then you know who these people are and probably suspect what a great time I had.

But even better was the community of women at this thing!  Holy crap!  The woman’s health panel was at eight forty five in the morning.  That might be a good time for a lot of people.  But it’s not for me.  And it’s not for anyone who was up partying at the conference like I was.  But still — the room for the panel was packed!  Standing room only!  Can you believe it?  During the panel we laughed, we cried, we applauded.  (Purchase a video recording for$5.99 here!)  Afterwards I got to spend some quality time with some really stellar women talking about periods and sex and babies and life.  It was awesome.  One of the biggest honors of my recent life.  Thank you, all of you I got to hang with.  Those of you I can link to off the top of my head are Danielle and Kaila.  Hugs, hugs, hugs. 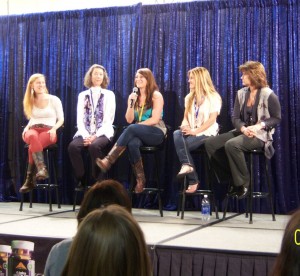 Speaking of which.  So.  The panel.  I didn’t get, of course, to say everything I would have liked.  But some highlights include imploring women to love their hormonal fluctuations.  To say yes to libido and no to restrictive behaviors that curb it.  To tell women to have fierce pride and to flip society a giant nasty bird.  And also coming out as a fruit junkie.  I eat 50 percent fruit in my diet.  What of it?  My labs are good.  I told the women there I eat six apples a day sometimes.  That was a big confession — but even then a low ball estimate.  The number sometimes can probably go up to twelve if that happens to be my only fruit for the day.  So shoot me.  What’s wrong with that?  (Hint:  that was a rhetorical question.)

I also got requested to speak over Nora Gedgaudus, one of the most elite of the paleo elite if there is such a thing (there isn’t because everyone is so down to earth.)

But just in case you were wondering, ladies, I have to pat myself on the back for that one.    Our message is becoming pretty damn powerful.  Don’t restrict carbs if it’s hurting your mental or physical health.  Or any macronutrient, for that matter.  That’s what the woman who asked for me to speak wanted.  To affirm her desire to eat whatever macronutrients she wants — and as a pregnant woman!   That’s what we do here at paleo for women, and it’s cool — people are starting to really like it.

Which is related to a thought I’ve been having for a long time and got magnified at paleo fx.  I’ll write about it soon but here’s a teaser: I suspect the paleo diet’s infatuation with fat with some day be debunked. Of course it’s still valid, obviously.  But for weight loss, I think low fat diets might also have some merit if some people don’t like low carb.  And for people without insulin derangement — well.  We have this whole idea — “sugar burners” versus “fat burners.”  Bullshit, I say!  Our bodies burn fuel when they get it regardless of what type it is.  More on this later.

And finally, a question: what the hell is this all for, anyway?   A big piece of my apathy about paleo fx was the redundancy of it all.  I know what a paleo diet is.  The vast majority of the people at the conference did, too.  So what were we doing there?  What were we chasing?  Why were people going to talks all day about the paleo diet?  I’m not 100 percent sure, but I think it largely has to do with identity and love.  People love this diet — I don’t blame them — it radically changes lives — but I also think there can be problematic things about that.  We get over-invested in it.  We identify with it.  We try to find purpose in it.  But the thing is — and this is something I feel very strongly about and will write more on soon —

The paleo diet is just a diet.

I know I talked about community and love and such a lot in this post.  And it’s true — I love what the paleosphere has got going for it.  But it is just. a. diet.  It’s got lifestyle components, sure.  And fitness, sure.  But beyond that — why are people so enormously invested in this thing?  What I want more than anything is to help people to eat and to love themselves and then to move on.  NOT to chase perfect health as a life purpose.  To what end are we doing this whole thing?  What we want in life is a good life, not a diet masquerading as a good life.

So I love paleo.  I love paleo fx.  But it does not define me.  I am a woman.  A philosopher.  A health advocate, sure.  A dancer.  Someone who loves the hell out of living and is doing her damndest to suck the marrow out of life.  Someone who tries to lighten the burdens of the world — who walks as much as she can with compassion and empathy and love and joy.  You know — all that good stuff.  I eat natural things.  It’s important.  But it doesn’t define me, and learning the difference between those two things has been one of the most important realizations I’ve experienced in the last few months.

Read what I have to say about it here, and also read some reviews of it on the “blog” page.


Note - some links above may contain affiliate links. You don't pay more, but we get a small cut to help keep this organization running. It's tough to balance ethics with the need to stay alive. Thank you for your patience and understanding!
.
Tweet
Share36
Pin
Share
36 Shares