Guest Post by Alison Golden: On Art, Creativity and Using Your Talents to Improve Your Health and Your Life 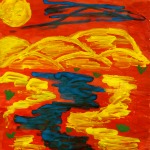 “The seed of your next art work lies embedded in the imperfections of your current piece. Such imperfections (or mistakes, if you’re feeling particularly depressed about them today) are your guides — valuable, reliable, objective, non judgmental guides — to matters you need to reconsider or develop further.” ― David Bayles and Ted Orland, Art and Fear.

I write a blog. I also write books. And write about ghosts and ghostwrite for others.

It is a core skill of mine. One that I am in constant demand for. Because, it seems, no-one likes to write, or thinks they can write (which isn’t true, actually, many people are just fine writers).

Let’s go back a little

I already had a blog when I decided to eat the paleo way.

Naturally, I wrote now and again about paleo and what I thought of it, but The Secret Life of a Warrior Woman was more of a personal journal type blog and many of my readers weren’t paleo or interested in it.

But when I wrote a blog entitled 27 Ways to Live With Your Non-Paleo Spouse, it got spread around the paleo-sphere in short order.

And I went, hmmm…

Someone suggested I start a blog about living paleo in a world that isn’t, but I already had far too much on my plate.

In addition to my blog and its’ various social media appendages, I had clients, and a family, and a transatlantic travel schedule that saw Virgin Atlantic cabin crew recognizing me on sight. I really didn’t need another blog.

But I have something of an ego and the demand to write another blog appealed to that part of me. But still, I’m old enough to know that ego-driven activities soon pale if there isn’t some other call to action.

I needed something more concrete to push me off the mat.

People I knew in real life who weren’t paleo, but did read The Secret Life of a Warrior Woman, started asking me about it. I became known as someone who “does paleo”.

And I noticed a behavior change. Not in them, but me.

I upped my game. I became more committed to paleo. I thought about my choices more carefully. I said “no” more often.

I considered growing my own food.

I saw that perhaps there was a benefit to writing a blog on doing this paleo thing. For me. I saw that with more investment came more accountability, more knowledge, more commitment.

So I set off, establishing a portfolio of writings that sought to stake out a corner of the paleo interweb that wasn’t being addressed: the corner that addresses behavior change, habit formation and transitions.

I also wanted to talk to people who more like me – who knew the “what” and the “why”, and who didn’t need more persuading, but who did want more on the “how”.

And those who’d never been inside a Crossfit box. Or got tatted up. Who weren’t interested in the paleo dramas, who just wanted to get on with it.

Since then, I’ve gone to develop Paleo/NonPaleo beyond my wildest imaginings: thousands of subscribers; kudos, recommendations and well-received guest posts on respected blogs. A book. More clients. It’s all been quite spectacular.

But most of all, I’ve deepened my commitment to paleo. I’ve researched, tested and refined my approach to eating paleo in a non-paleo world.

I try things out on myself, then write about what I’ve learned. Or sometimes it works the other way around, and it is during writing and exploring my ideas that I hit on a new success strategy.

During this time, I’ve analyzed why we do the self-sabotaging things we do. I’ve studied habit formation, cholesterol in women, the importance of sleep.

I’ve shared my personal stories, brought forth rallying cries, coached, motivated (I hope!) and occasionally “told it like it is.”

My thirteen-year-old twin sons are often put into “learning pairs” at school by their teachers. The teachers know that sharing what students have learned with one another strengthens the new teaching.

This is, in effect, what I have done with my blog, and I suggest we all do the same when we are developing a new passion, skill or set of habits.

What is your core talent? What do you enjoy doing in your spare time? What are you passionate about?

And then apply your talent to creating something to teach paleo concepts to others.

If you like to code, design an app to meet the needs of someone who is following a paleo lifestyle. If you like to present or entertain, get yourself a booking at a local venue to talk on the paleo diet. If you like to host parties, give your next one a paleo theme.

You can apply this idea to any realm – quilting, scrapbooking, sculpting, interior design, anything.

Get creative and come up with an idea. Use your own skills to spread the paleo word and strengthen your own commitment and skills in the process.

Creativity occurs in the margins; where interest and inspiration overlap

When you produce your art, mix it up with something that illustrates paleo ideas. Combining my skill in writing with my desire to embed healthier eating habits into my life naturally led to a a blog on paleo living. What talent do you have that could be used to deepen your own commitment to, and teach others about, great health, individual responsibility and paleo?

Alison Golden writes on the topic of paleo over at Paleo/NonPaleo. She aims to share ideas, inspire and motivate readers by teaching them how to live paleo in a non-paleo world. She is also the author of the bestselling book, The Modern, No-Nonsense Guide to Paleo, a unique tool that gives the reader hundreds of strategies to navigate the learning process to successful paleo living.


Note - some links above may contain affiliate links. You don't pay more, but we get a small cut to help keep this organization running. It's tough to balance ethics with the need to stay alive. Thank you for your patience and understanding!
.
Tweet
Share9
Pin2
Share
11 Shares