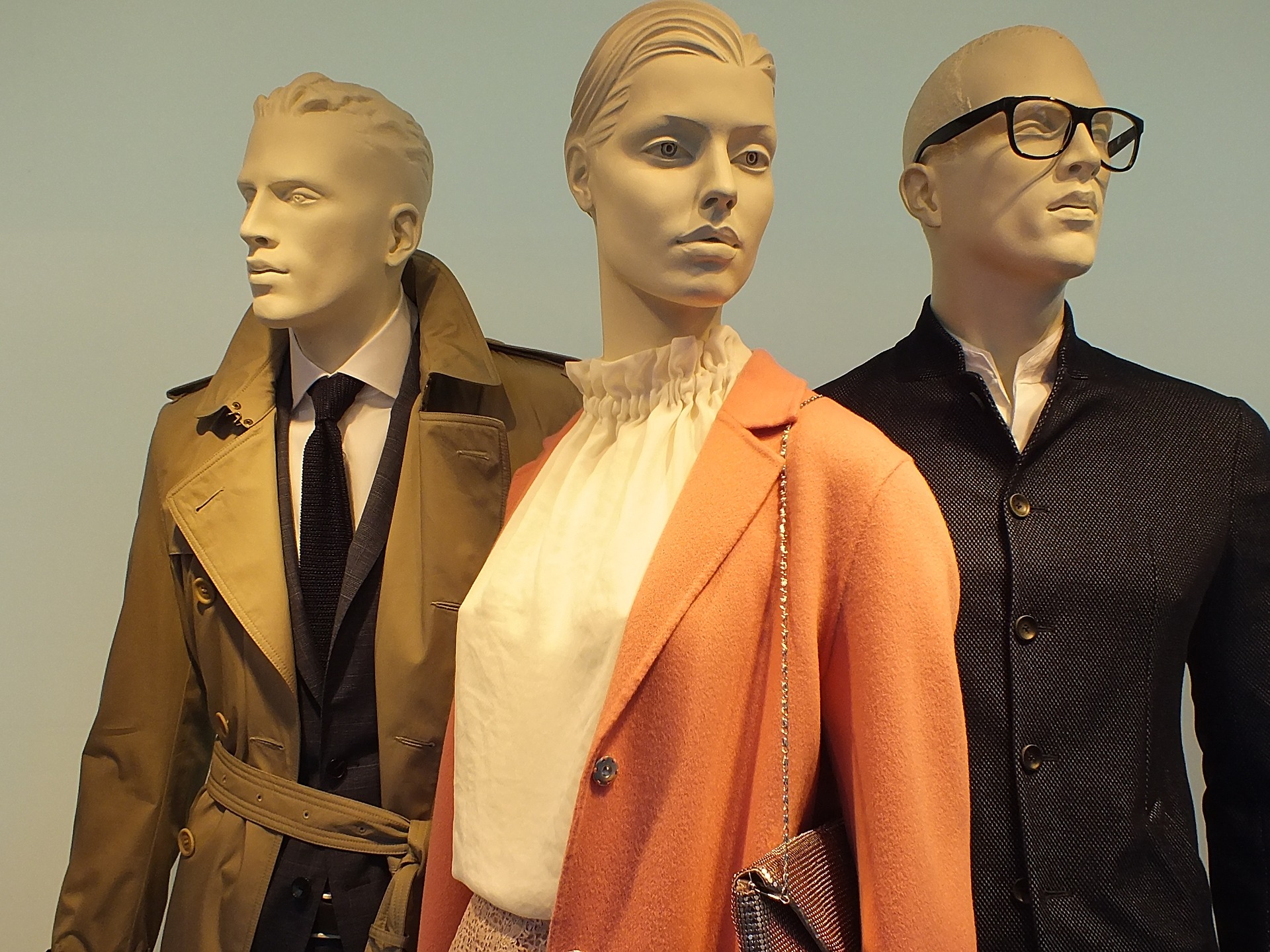 Mannequins do not menstruate, and this is not just because they are made out of plastic.

Here are some images of mannequins in clothes and fully nude. I think this difference is important to pay attention to because seeing mannequins in clothes the majority of the time impairs our ability to process just how specifically manufactured they are to drape clothing just so and to go beyond all reasonable body size aspirations. We don’t regularly see what’s underneath. But what’s underneath is nothing but angles and Barbies.

Note, for example, how hip bones often jut out, which is a way to cause skirts and pants to taper and hang low and stereotypically sexy. Note also how waists are tiny. Note also how legs are longer than the list of activity on my credit card accounts. Which is to say – Long.  Disproportionately so. 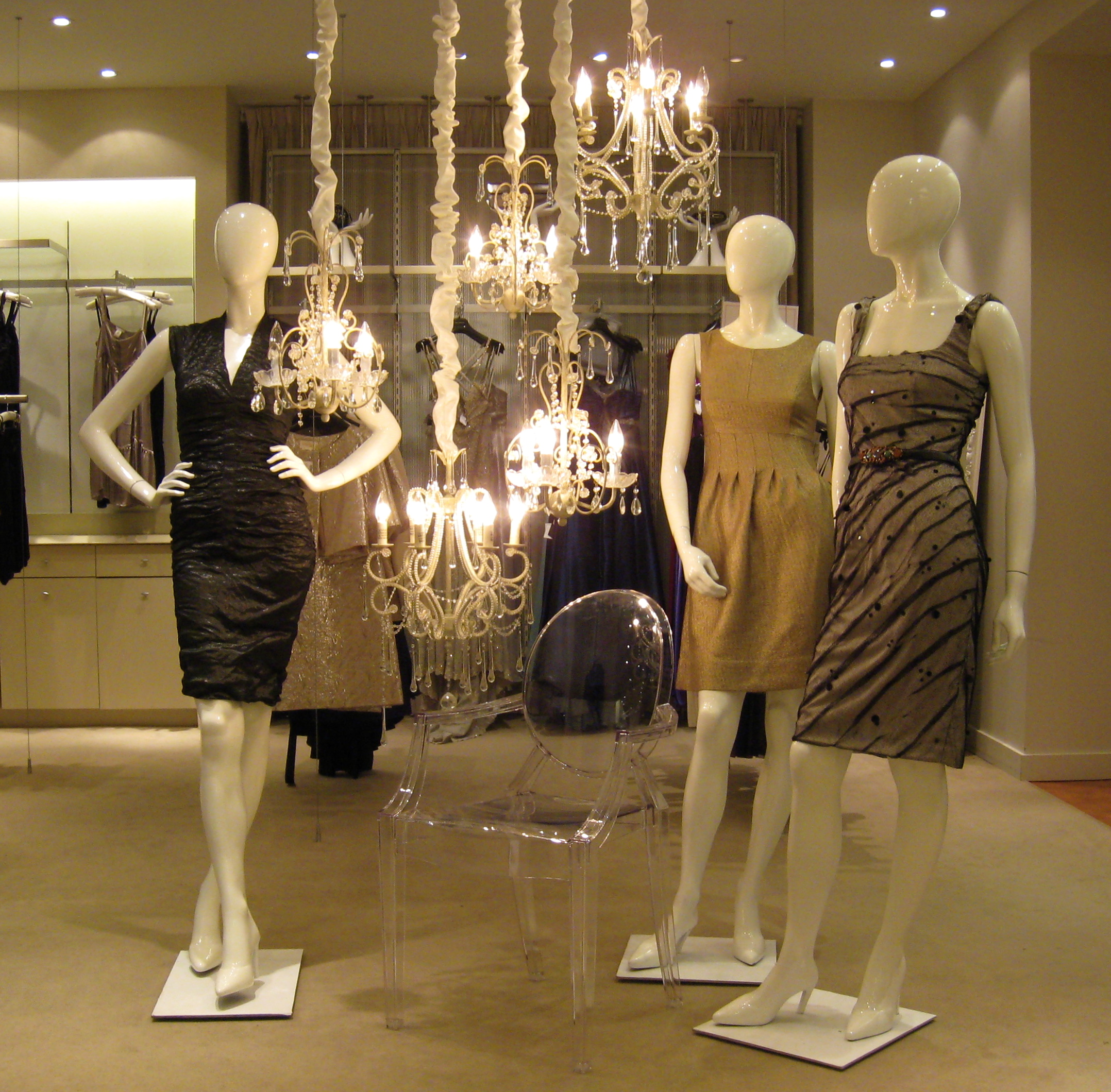 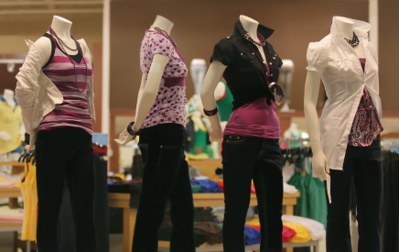 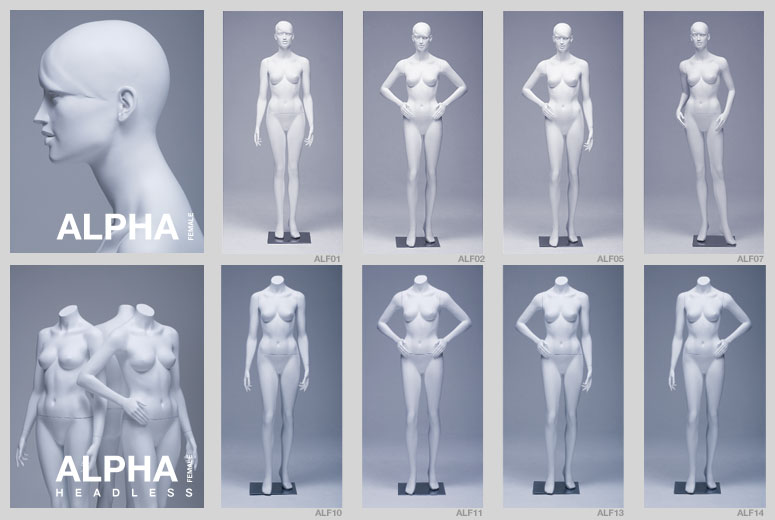 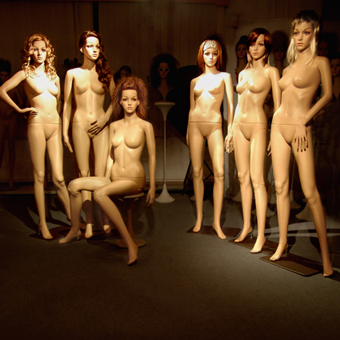 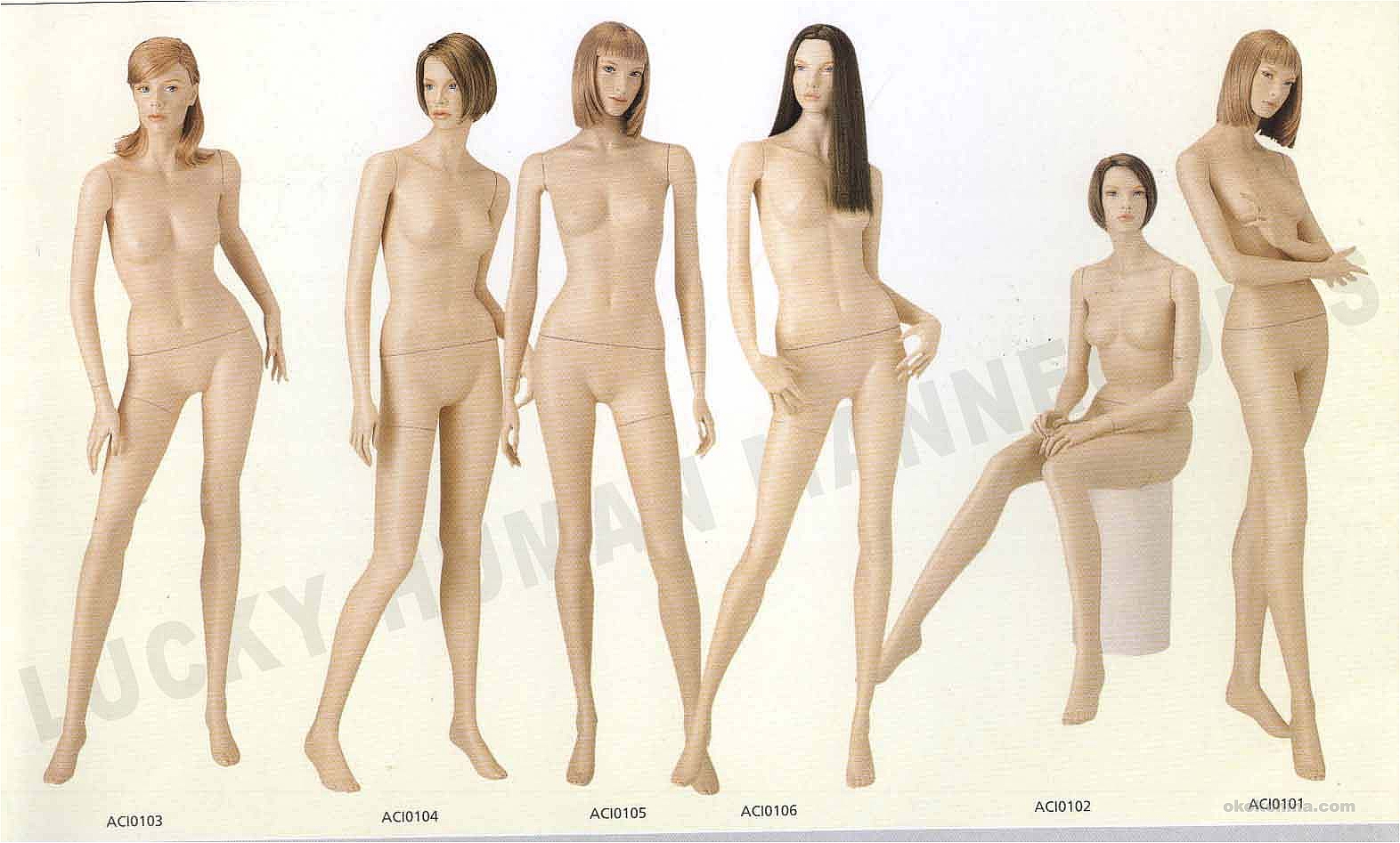 To which I can only say, holy crap thigh gap.

Mannequins are problematic for a lot of reasons. One of the worst is that this is a subconscious problem. We are well aware of the damage magazines and celebrities and runways and the like do to our self-love, but how often do we consciously acknowledge the power mannequins have over us?

Which is unfortunate – because it has been at least somewhat scientifically proven that mannequins do not have a high enough body fat percentage in order to menstruate.

Two Finnish researchers, Minna Rintala and Pertti Mustajoki, tested standard accepted body fat percentages for women against measurements they made on mannequins (of arm, thigh, waist, and hip circumference are all standard means by which to measure body fat percentage) they found in Finnish museums that were from the 20s, 30s, 50s, 60s, and 90s.

Women need, on average, at least 17% body fat to begin menstruating. The researchers also use the data point of 22 % body fat for regular cycles – though I would argue that this is a statistic biased from the sample being drawn from the super industrialized nations of Western Europe and the United States. For the purposes of our investigation, however, their standards hold since we are largely of industrialized nations such as the US. Our mannequins, we should also note, are typically about 5’10 — the same size as the “fit” models on runways.

In this study, the pre-WWII mannequins had levels of body fat that were consistent with those seen in a healthy, young female of reproductive age population: up to 23 percent, at least.  All the way up to 23 percent! That feels incredible – though it makes me sad to write that sentence. Women are known to be quite healthy up to and around 30 percent.

Starting in the 1950s, the estimated body fat on the mannequins decreased significantly. By the 1990s, a significant number of mannequins would not have sufficient body fat to menstruate if they were, you know, actual people. Check out the graph below. The bars detail body fat percentages for hypothetical women of “healthy” body mass indexes of 20-25. In the early decades the mannequin measurements come close, but in later decades fall far below a healthy BMI (note also that the WHO standard for “healthy” BMI goes down to 18.6..though this is contested, as in all things). 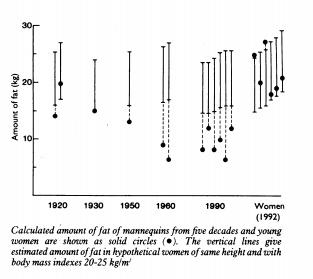 So what do we do with this knowledge?
Stop expecting clothes to look on us like they do on mannequins, I think.
And think about that maybe not even as a neutral thing, but as a good thing.
Sure, there are women out there with body types as slender and tall as mannequins with as little body fat, and perhaps naturally so. That’s great – beautiful – natural, what-have-you. I am sure some of them menstruate, especially if they live in less industrialized countries. But the majority of us plain old are not, and its a simple fact that extremely low body fat percentages result in impaired fertility, and, hey, isn’t it cool that we have enough body fat to menstruate?
And, hey, isn’t it cool that we know (more about which forthcoming in a HuffPo article by yours truly) that runway models starve themselves precisely in order to be the same size as mannequins, and that when we do the eat-sufficient-calories-healthy thing we are simply doing the human thing?
And, hey, isn’t it cool that we have lumps and jiggly parts and quirks and scars that only real human beings who love and dance and have sex and laugh can have, and not ones made out of plastic?
Mmmmmm humanity.
—
My book, Sexy by Nature, describes a whole foods approach to health, sex appeal, and confidence for real human beings.


Note - some links above may contain affiliate links. You don't pay more, but we get a small cut to help keep this organization running. It's tough to balance ethics with the need to stay alive. Thank you for your patience and understanding!
.
Tweet3
Share130
Pin7
Share1
140 Shares