Dairy and Acne: Everything You Need to Know 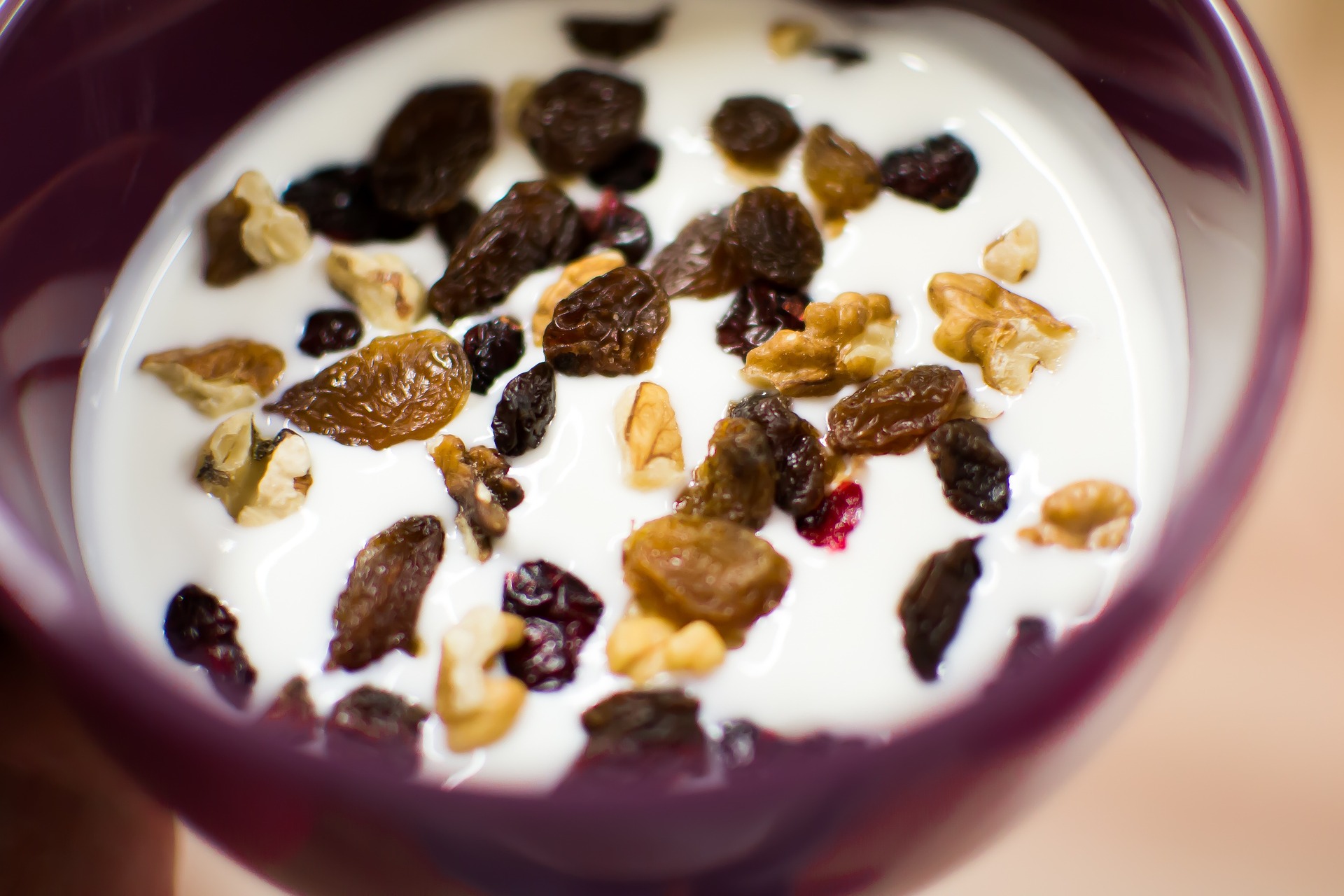 One of the first things I ask women when they tell me they struggle with acne is: “Have you tried eliminating dairy yet?”

Dairy and acne are quite closely linked. There are two primary reasons for this: dairy is hormonal, and dairy affects the gut. I will first talk quickly about how acne is formed, then I will highlight how the hormonal and intestinal aspects of dairy affect this process.

Dairy and acne: how acne is formed

Acne is caused by a combination of many different factors in the layers of the skin.

There are three layers to the skin. Pores and hair follicles traverse these layers. In healthy skin, a nice, lubricating oil is delivered to the surface of the skin from the bottom up through the pores. You may want to think of it like a river. Oil flows through the pores passing by the lower layers of the skin and ends up on top, and spreads out over the skin to moisturize it.

On one end, the oil production increases. When this happens, there can be too much oil trying to push up through the pore, and it will get stuck.

On the other end, skin cells from the top layer of the skin fail to separate and shed properly. This is a process known as keratinization. Sometimes skin cell keratinize too much, clump together, and get stuck in pores and hair follicles.

With all of this extra material in the pores, from both the oil “below” and the keratinized skin cells “above,” this creates an excellent breeding ground for p acnes bacteria.

The bacteria infect the clogged pore, and then the immune system attacks the bacteria. This looks like inflammation, and will usually result in a red sore, often with a hard white pus that is difficult to resist popping.

So in sum (and acknolwedging that there is a whole lot else going on, more about which at this brilliant site), the primary problems affecting skin health are oil production, keratinization, and inflammation.

Dairy, moreso than any other food, increases oil production in the skin.

They also, unfortunately, stimulate the production of oil in the skin.

One such hormone is insulin.

Insulin is a growth hormone. When the sebum-producing cells near the surface of the skin (called sebocytes) detect insulin in the bloodstream, their activity increases. Insulin causes oil production to increase in pores.

Milk and yogurt, on the other hand, have values higher than 100. Milk is near 100 (and higher in skim than in full fat milk). Yogurt (I’m assuming with sugar added) is a whopping 115.  This study found that when milk or yogurt is added to a meal it has no effect on blood sugar but  does significantly increase insulin levels.

Insulin-like growth factor (IGF-1) may be even worse than insulin.

IGF-1 is one of the primary growth hormones responsible for cell proliferation and production in human beings. It is quite healthy much of the time and can be helpful for people who are trying to build muscle and the like. It is found in super high concentrations in milk, as milk is the one thing we consume that is specifically designed to spur cell growth.

IGF-1 works together with insulin much of the time and we find that whenever one of them increases so does the other. IGF-1 makes skin cells grow faster which will speed up the rate of keratinization and pore clogging before normal skin cleaning mechanisms have a chance to intervene.

Testosterone is a big problem for women’s health because even a slight imbalance between testosterone and other female hormones will lead to irregular periods, infertility, poly cystic ovarian syndrome, facial hair growth, balding, low libido, mood dysregulation, insomnia, and, of course, acne.

Testosterone (and other male sex hormones, called androgens) causes acne because it increases oil production in the skin, stimulates the growth of skin cells, and, importantly, increases the body’s inflammatory response. This means that testosterone is implicated not only in clogging pores, but also in inflaming them, and turning them into large red sores on the face.

Moreover, it appears as though testosterone may play a role in weakening skin barrier function. It appears as though caffeine, when applied to the surface of the skin, may be able to mitigate this effect. This company has some excellent, clean skin care products with caffeine in them.

Dairy and acne: how dairy can cause inflammation

The primary carbohydrate (or sugar) in milk is called lactose. Many humans become lactose intolerant throughout the course of their adult lives for one reason or another. Lactose intolerance is characterized by an inability to break down lactose properly, which results in feeding bad bacteria in the gut. It causes disruptions in digestion which can lead to constipation, diarrhea, bloating, irritable bowel syndrome, and a disrupted gut flora population. All of these things, taken together, can cause irritation and inflamation in the gut lining, which goes on to send inflammatory molecules all throughout the body, including the skin.

The two primary proteins in milk and other dairy products are called casein and whey. Many people develop a significant sensitivity to these proteins, which function in the gut in a way not unlike that of gluten. They can irritate the gut lining and may be identified by the body as foreign invaders, which then causes an autoimmune-like attack and systemic inflammation. Any kind of disruption to the gut lining will cause an inflammatory response, which has a negative impact on the skin by increasing the amount of inflammatory molecules available to acne to become inflamed.

So far, we have seen how acne occurs when pores become clogged from the bottom up by oil and from the top down by keratinized skin, and then gets attacked by the immune system. Certain hormones, particularly testosterone and other male sex hormones, insulin and insulin-like growth factor 1 increase oil production and clog pores. The sugar lactose and the proteins casein and whey may cause gut irritation and therefore increase the number of inflammatory molecules in the bloodstream.

So far as food options go, not all dairy is created equal. Milk is the worst offender for acne, and skim milk the worst of all, since it is so high in sugar and hormones without any fat in it to dampen their effect. Cream has high amounts of hormones but is full fat so may decrease the impact of insulin, and if it is full-fat cream then it has not been proccessed and therefore may be healthier. There’s some reason to believe that yogurt doesn’t have as strong hormonal effect as pure milk does. For example, fermentation deactivates a large portion of IGF-1 in milk. The same would go for kefir. Some cheese is high in casein but not in whey and vice versa. Hormones will still be present in cheeses but due to its processing not quite as much.

Butter may be the safest bet of all dairy, since almost no sugars or proteins are left in it. However, the best dairy to consume of all is ghee, which is butter that has been clarified by being boiled and having all of the leftover proteins and solids skimmed off and removed. Hormones will still be present to some extent but less so, and sugars and proteins least of all.

This is my favorite ghee.

There are also dairy alternatives.

You may wish to try almond or soy milk, though I personally find those problematic as they can also have strong hormone effeccts since they contain not insignificant amounts of phytoestrogens for someone with as sensitive a hormone system as I have.

My favorite “alternative” is coconut. Coconut yogurt is especially delicious, and they even make coconut kefir now.

You may also wish to combat the hormonal effects of dairy.

Spearmint tea has been rumored to reduce testosterone levels in women.

To learn more about green tea and how to best steep it for it’s acne-fighting effects, check out the brilliant research of Seppo Puusa.

If you have PCOS or suspect that you may, since many women who suffer from testosterone-related acne do, check out my post What is PCOS?, PCOS treatment options, or my step-by-step manual or overcoming PCOS, PCOS Unlocked: The Manual.

And, again, I really cannot recommend highly enough the resources you can find at AcneEinstein.com, which is where the only person I have ever anything new about acne from writes.


Note - some links above may contain affiliate links. You don't pay more, but we get a small cut to help keep this organization running. It's tough to balance ethics with the need to stay alive. Thank you for your patience and understanding!
.
Tweet
Share158
Pin23
Share1
181 Shares

get skincare tips and deal

We never spam, and are too busy to send emails more than once a week anyway. Plus, we only email when we have something exciting to share <3

get skincare tips and deals

You have successfully subscribed! Check your email to confirm!

We never spam, and actually are too busy to email more than once a week. Plus we only write if we have something really worthwhile and exciting to share <3