Appetite and your period 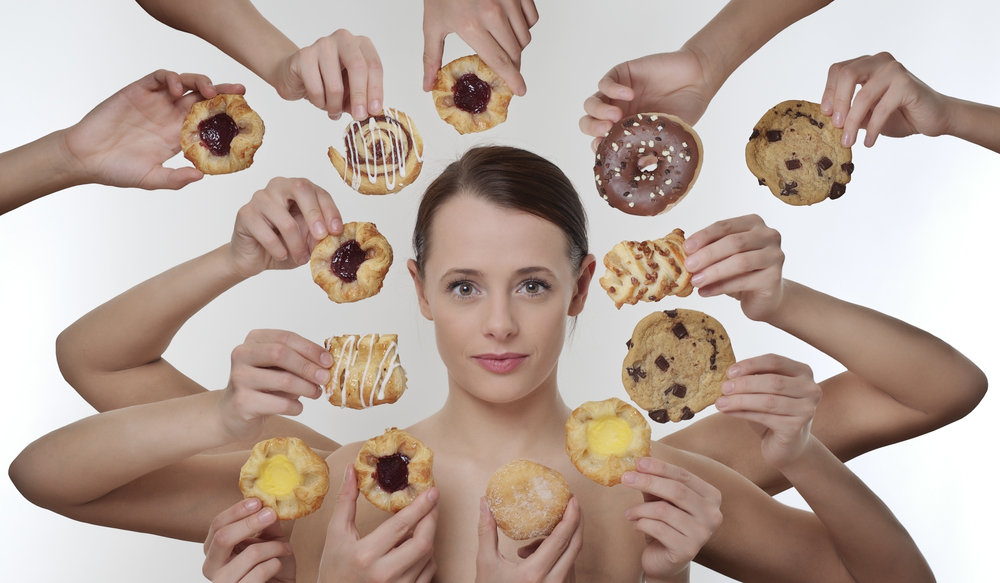 American culture is nothing but confused about the effect that the menstrual cycle has on women.  We have rumors about mood swings, weight gain, appetite, athelticism, acne, depression, anxiety, insomnia, inflammation, and more. But we really don’t know much about any of them at all, let alone if they are true in the first place. Does the menstrual cycle really have that great a grip on a woman’s physical and mental health?

There are in fact grains of truth to many of the vague beliefs we have about the menstrual cycle. Some are bigger than others. Today, I investigate one of those grains:

Does appetite fluctuate according to the time of the month?

There may actually be something to wanting to eat ALL THE THINGS during your period. I love this chocolate since it’s gluten, dairy, and soy free.  And these chips when I’m craving something salty.

If you take a look at the graph below (click to enlarge), made by Hirschberg for her 2012 article reviewing appetite in women, you’ll notice that appetite is complicated. It’s influenced by many different sources, such as gut flora, hormones secreted from the gut, insulin secreted in response to a meal, and leptin from fat cells. Yet hormones are most certainly one of them. Hormones interact with leptin, as well as feed directly into the brain to stimulate or suppress appetite. 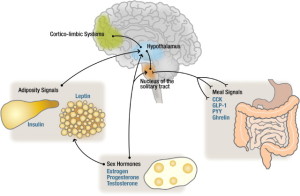 The two primary hormonal mechanisms of action are estrogen and progesterone.

Contrary to what you might guess – and what I originally guessed – estrogen is an appetite suppressant.  How is not totally understood, though it is widely thought that estrogen spontaneously decreases calorie intake by increasing the potency of the satiating actions of some gut peptides, especially cholecystokinin. The more cholescytokinin produced by the gut, the more full the brain feels. Furthermore, estradiol stimulates anorexigenic (stop eating) POMC/CART activity and inhibits orexigenic (keep eating) NPY/AgRP neurons.

There is evidence that estrogen does all of of these things in both rodents and humans. Rats that have had their ovaries removed, and thereby lost their estrogen-producing capabilities, for example, spontaneously eat more and gain weight. When injected with estradiol, their normal feeding and weight behaviors are restored.

In contrast to estrogen, progesterone appears to increase appetite. When administered high doses, ovariectomized rats eat more. This happens in humans as well, and most especially when in the presence of estrogen. Unless a woman has had her ovaries removed, she will always have at least some estrogen in her bloodstream.

So what about the menstrual cycle?

It seems clear from studies on both rodents and humans that estrogen decreases appetite and progesterone has the power to increase it. Do estrogen and progesterone fluctuations during the menstrual cycle make this happen? Hirschberg put together a graphic to approximate the feeding effects documented in women (again, click to enlarge): 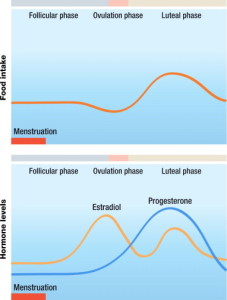 You can see from this graph how feeding decreases when estrogen spikes and increases when progesterone does. This model is supported by data from several studies, including, a meta-analysis that revealed that mean food intake is lowest during the periovulatory phase of the menstrual cycle, when estradiol levels are high (see here), and other studies that have demonstrated that there is typically a peak in food intake occurs during the premenstrual period, when progesterone levels are high (here, here, here, and here).

Hormones and appetite in pregnancy and lactation

It’s not the explicit topic of this post, but I thought I’d throw in some notes on pregnancy and lactation. They are fascinating periods of hormone regulation. Learning about them demonstrates a bit more about the ties between hormones and appetite.

Both animals and women eat more during pregnancy to ensure health fetus growth. Rats will eat up to 200 percent their normal intake! In humans, the increase is more moderate, at about 10–15%. This effect is greatest from about week twelve until midgestation, when physical activity and food intake both decline.

No one knows quite for sure what biological factors cause this increase in food intake. Of course the fetus causes an increased caloric need, but the body doesn’t leave anything to chance. It doesn’t wait for the fetus to demand food in order to provide it — this could result in starvation for both the woman and the fetus. Instead, it uses hormones to get the woman to start eating more at the right time. Progesterone appears to be a primary component of this. It does so via specific receptors in the brain.

During lactation, progesterone becomes less important and prolactin possibly more so (though, again, simple energy demands from the fetus are likely the greatest factor.)  At this time, energy requirements are even higher than during pregnancy, with breastfeeding demanding approximately 500 extra kcal per day. This elevated need is generally met bya number of mechanisms: 1) being less physically active, 2) by eating 20–25% more (which makes sense, since most women consume approximately 2000 calories/day), and 3) by mobilizing fat tissue, which is an excellent natural way to burn off pregnancy weight.

I’m not sure. For one, this biochemistry might explain a little bit why there’s that mythic “go wild for chocolate” part of the menstrual cycle. 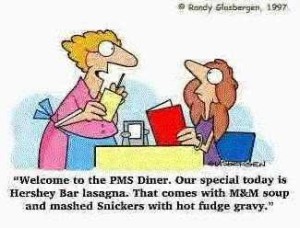 Second, it is totally cool that the reproductive system is so powerful! I am a firm believer that there’s no need to try and resist any enhanced cravings that you feel throughout your cycle. Typically the body will burn through the extra calories consumed on this level, especially if it is demanding it because of energetic and hormonal demands.

In fact, listening to these appetite fluctuations is one of the best things you can do for your body. Your body wants you to feed it when it asks to be fed. There are lots of ways to feed it in a healthier way, like some of the fantastic looking things in this book.  But if not fed, the body down-regulates thyroid activity, slows metabolism, and may even decrease the potency of reproductive organs.

The lesson here isn’t to start counting calories.  It isn’t to weight and measure while you’re PMSing. It is, instead, to understand how your hormones vary throughout the month, appreciate the wonder of your reproductive body, and do your best to be its partner and provide what it needs.

And for god’s sake, just eat the chocolate! 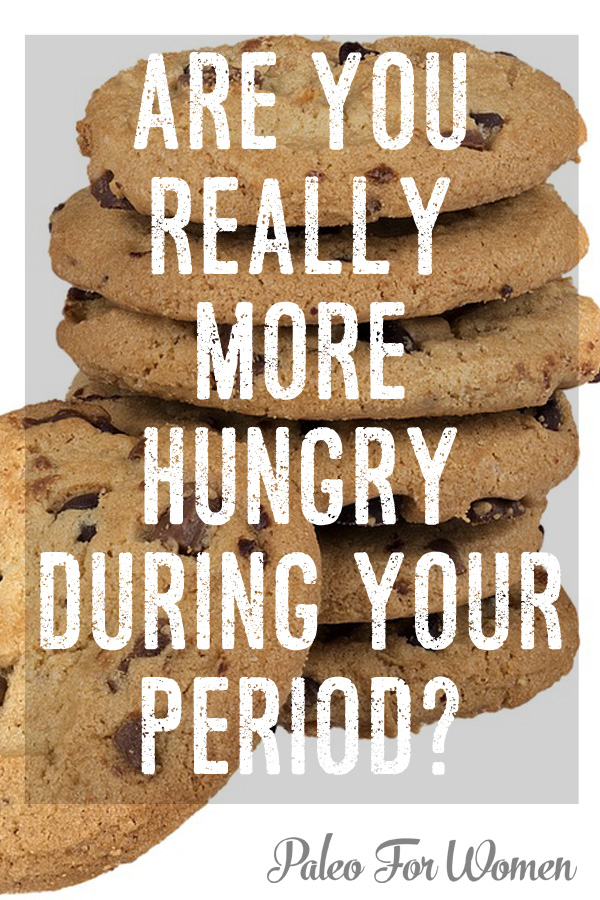 Want to learn more about hormones, food, and fat? If you haven’t heard yet (and sorry if you have like a million times) there’s a super kick ass this week only collaboration between my favorite paleo thinkers (Kresser, Wolfe, Sanfilippo, me, etc) on female fat loss. Check out everything – which, btw, is competely free – @ the site where it’s all available:


Note - some links above may contain affiliate links. You don't pay more, but we get a small cut to help keep this organization running. It's tough to balance ethics with the need to stay alive. Thank you for your patience and understanding!
.
Tweet5
Share176
Pin101
Share
282 Shares